This Fixed-head coupe XK has been beautifully restored by a top Jaguar expert over a 15year period. It is a matching numbers car and comes with a Heritage Certificate. Receipts are available for all parts that were shipped in from the UK, there is also a certificate to confirm that the complete interior is to the original factory spec.

The car has it’s original 4 speed gearbox. If you are in the market for a classic car then this has to be the best choice. Why not come in to our showroom floor to view it and see if it fits your desire.

The XK140 was introduced in late 1954 and sold as a 1955 model. Exterior changes that distinguished it from the XK120 included more substantial front and rear bumpers with overriders, and flashing turn signals (operated by a switch on the dash) above the front bumper. 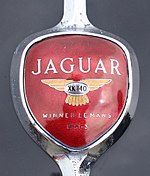 The grille remained the same size but became a one-piece cast unit with fewer, and broader, vertical bars. The Jaguar badge was incorporated into the grille surround. A chrome trim strip ran along the centre of the bonnet (hood) and boot (trunk) lid. An emblem on the boot lid contained the words “Winner Le Mans 1951–3″.

The interior was made more comfortable for taller drivers by moving the engine, firewall and dash forward to give 3 inches (76 mm) more legroom. Two 6-volt batteries, one in each front wing were fitted to the Fixed Head Coupe, but Drop Heads and the Open Two Seater had a single 12-volt battery installed in the front wing on the passenger side.

When fitted with the C-type head, 2-inch sand-cast H8 carburettors, heavier torsion bars and twin exhaust pipes, the car was designated XK140 SE in the UK and XK140 MC in North America.

In 1956 the XK140 became the first Jaguar sports car to be offered with automatic transmission. As with the XK120, wire wheels and dual exhausts were options, and most XK140s imported into the United States had wire wheels. Cars with the standard disc wheels had spats (fender skirts) over the rear wheel opening. When leaving the factory it originally fitted either 6.00 × 16 inch crossply tyres or you could specify 185VR16 Pirelli Cinturato CA67 as a radial option on either 16 × 5K½ solid wheels or 16 × 5K (special equipment) wire wheels.[2]